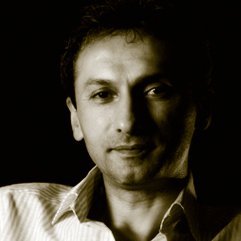 Born in the historical home of Arts and Culture in Northern Iran, Firouz Hakimzadeh was interested in drawing and painting starting from his early childhood. Firouz received his Bachelor of Arts from the prestigious Art University in Tehran, Iran and shortly after graduation he began his career in the art industry as a prolific artist. He went on to make a name for himself as Designer/Painter, and many of his works were showcased in various exhibitions across Iran and Canada.

Notably, one of his most prominent works entitled “The Door to Eternity” was exclusively featured in the art book: History of Iranian Painting and was also exhibited at the International Biennial of Art in 2004.

Firouz was named one of the most influential artists of his generation in the book of Postmodern Artists in Iran. He has over 30 years of experience in drawing, design and painting. Furthermore, he has extensive knowledge of different methods/styles of art ranging from impressionism to abstract etc. Firouz Hakimzadeh always strives for perfection in each of his pieces and enhancing the craftsmanship and quality.